Drones in Search and Rescue (key advantages when time is critical)

Drones in Search and Rescue.

While drones are rapidly demonstrating its value across many industries, its application is particularly dramatic with drones in Search and Rescue operations where the extra range and reach of drones make it is presence felt like nowhere else. Unlike most other applications which are fairly routinized and predictable, SAR operations are very unpredictable and each operation unique in its execution.

Common SAR operations features though are:
Time criticality
– A life threatening event has happened to someone out of the blue
– And speed of response is of the essence to rescue this victim
Commuting congestion
– Also reaching the site might require traversing unhelpful traffic conditions
Terrain
– Rescue operations are generally by definition needed in inaccessible terrains which might have caused the emergency in the first instance
– Because it is difficult to navigate, ‘Eye-In-The-Sky’ Situational Awareness is essential Search times can be significantly reduced while limiting potential risk to the party being rescued as well as rescuers. 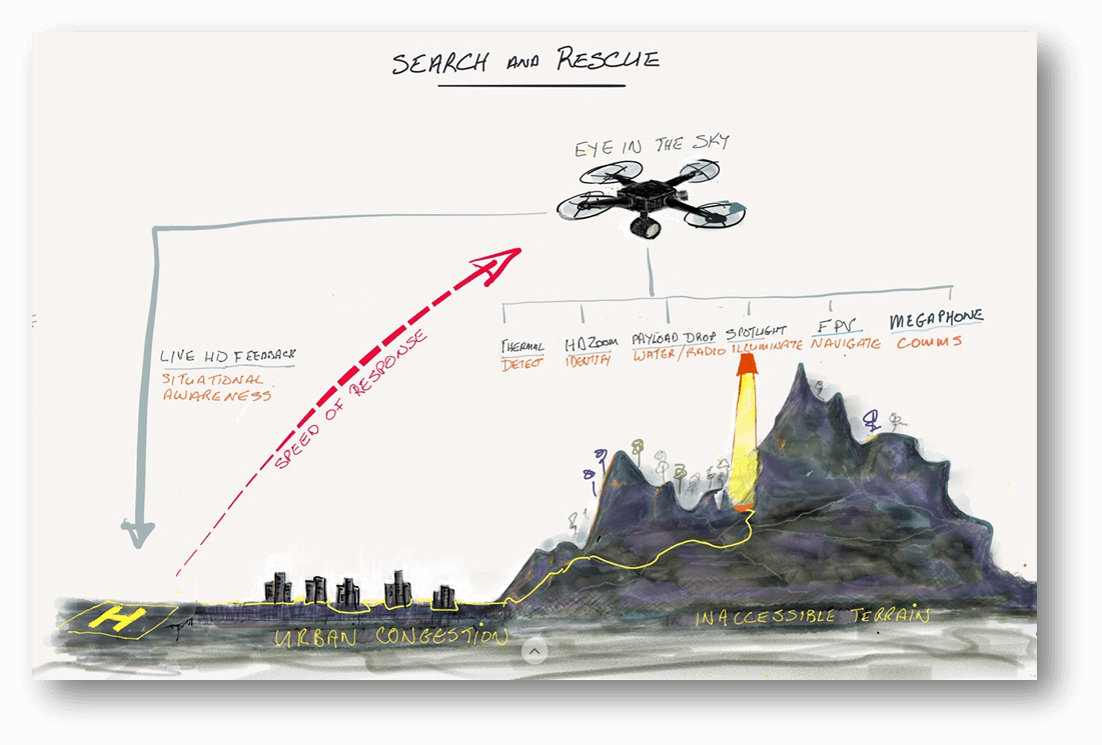 There are many options and benefits to using drones for search and rescue:

Urban setting advantage only
A discussion in a related article (https://www.airbornedrones.co/car-chases/) the drone advantage in a urban setting is estimated to be about 120% based on Direct Line speed, Traffic Advantage and Field of View advantage.

Inaccessible terrain
While it is important to overcome urban traffic congestion (if applicable) to reach a victim, this aerial advantage is multiplied many times over once the ‘Inaccessible Terrain’ part of the journey is reached, the latter also often being the cause of the victim’s condition.
In a few minutes, they transport the eye of the observer just above the location of the incident, sweeping broad surfaces, flying over abrupt, inaccessible, distant or dangerous areas for the men that operate on the ground.

Live HD Feedback
There is no point sending any aircraft into the air for SAR if the visuals can’t be relayed to the ground team or command unit.
A search and rescue drone is an unmanned aircraft used by emergency services, such as police officers, firefighters or volunteer rescue teams, ideal for searching over vast areas for missing persons and crime victims in need of rescue and in any environment.
Unmanned aerial vehicles (UAVs) can provide real-time visual information and data in the aftermath of an earthquake or hurricane. They can also become an eye in the sky to locate a lost person in the mountain for example. When a disaster or incident threatens lives and livelihoods, emergency responders need information and real-time imagery in order to make better decisions and save time. UAVs can provide situational awareness over a large area quickly, reducing the time and the number of searchers required to locate and rescue an injured or lost person, greatly reducing the cost and risks of search and rescue missions.

Thermal Imaging
SAR missions generally seek to rescue humans or other warm blooded life forms. Thermal cameras are ideal for this as body heat naturally makes humans stand out from plant life, making them easy to spot very
Almost all commercial drones come equipped with GPS, allowing the pilot to offer rescue teams the exact GPS coordinates of the subjects once they have been spotted. With the live view feature of any drone used for search and rescue, the pilot can also guide rescue crews to their location.
Rescue drones are designed to provide cost effective, real time data and imaging, day or night, in challenging conditions and without risk to personnel. Aiding in the search for missing persons is the infrared (IR) thermal imaging camera that can detect human body heat. This capability greatly increases the ability to find people or objects at night that may be hidden, even during daytime operations.

Zoom Cameras
Once a victim has been located, optical zoom cameras can be used to check on their well-being to analyze the severity of the rescue and make sure rescue teams have the equipment necessary to get their subject back safely, which could save valuable time in the rescue operation, time that could mean life or death. All of this can be assessed while maintaining a safe distance from all parties involved.
Sometimes a positive identification may be required first, for both people who want to be found or don’t want to be found (eg., by law enforcement). A zoom camera also has the ability to zoom in and make a positive identification without sending in ground crew.

Spotlights
Adding spotlights to drones to light up a target area creates additional visibility for everyone during night operations.

FPV
Rescue drones also have a built-in FPV camera for a straight forward view regardless of where the gimbals are pointed, so the pilot can operate the aircraft safely.

Loud Speaker/ Microphone
Using onboard speakers, and microphones, direct communications can also be established with victims in distress (or ground crews) to assist with the rescue process. After a lava pond outbreak rescuers and victims were directed to “Follow the drone to safety” to avoid treacherous conditions. In Japan, as part of Mount Fuji rescue operation trials, authorities were also able to use the latest Apps to plot the most efficient flight paths to rescue stricken hikers.

Rescue Drones are ideal for complex rescue operations of which a full-scale demonstration exercise was conducted in Rome recently. The rescue exercise was meant to emulate a rescue operation after an earthquake and to show how much critical time can be saved in such situations