Smart City Technologies are being deployed in cities all over the globe.

Drones and the smart city.

Wisconsin police recently reported that with the help of their search and rescue drone, they captured a robbery suspect that was evading police. Amidst all the negative publicity surrounding drones and UAVs that has matriculated in the news recently.
In a “smart city” concept, a city will interconnect all public services using digital, information and communication technologies. The resulting enhancement in the quality and performance of urban services reduces cost and resource consumption within the city. Currently, sectors that have been developing this technology include government services, traffic management, energy, water and waste.
This vision focused on the public safety sector, which relates to the aforementioned news report out of Wisconsin. In a smart city, a 911 call would immediately dispatch a properly outfitted UAV to the exact GPS location of the caller. Unimpeded by stop signs, road traffic and inefficient street travel, the UAV is able to fly directly to the scene. Its real-time video link to a squad car, fire truck and/or ambulance, as well as to the 911 dispatcher, would provide first responders with an accurate scene assessment. The UAV provides video feed of a raging fire, mass shooting or riotous group in order to enhance the situational awareness of the responding officer(s). With this technology, first responder safety is not only enhanced but their ability to effectively deal with the situation as it is presented is increased.
Smart city technology is coming. It is not a technology of the distant future. The use of a search and rescue drone to get a violent offender off the street yesterday is testimony of its effectiveness at enhancing public safety.
Increasingly with a drones it is realized that you can interact physically with the world around you in a much wider circle, beyond your own reach both personally and as an enterprise. UAVs provides a three dimensional view of your business and enables customers to redefine their industries.
Drones (UAVs) are an important part of the Internet of Things.

Equipped with RFID antennas or sensors, they can help us track objects or people, or alert us to changing environmental conditions. 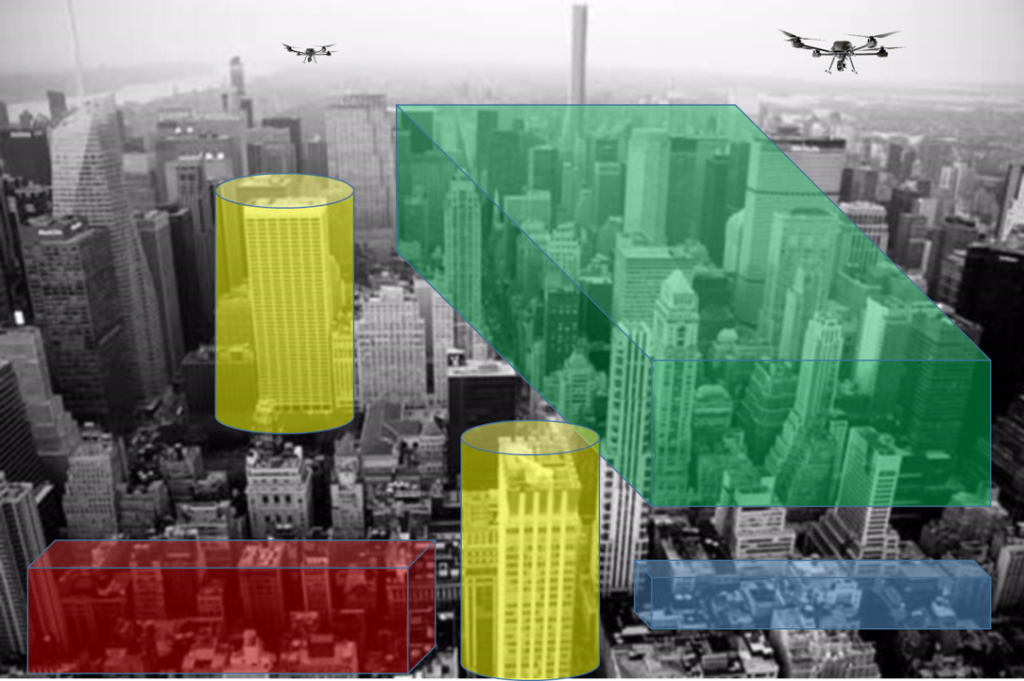 Urbanisation is expected to grow by as much as 90% by 2050 and technology is the only way to leverage existing resources to cope with such an increase in demand. To this end, smart cities projects have been launched the world over to cope with the looming contention. Drones and the smart city is a very effective way of dealing with the congestion.

So what is a Smart City?

There are many definitions but common themes include:

– Shared platform of functionality for cooperation and innovation

So how does it work, the concept of: drones and the smart city?

Drones and the Smart City: APPLICATION AREAS
UAVs or drones are easy to deploy; they have flexibility in performing difficult tasks, supporting high-resolution imagery and can easily cover the remote areas. Drones are typically used in the following application areas:

Drones and the Smart City: MODES OF APPLICATION
These application modes mentioned above enable drones and the smart city to achieve the following outcomes:
Smart traffic management (Surveillance and Security)

Go to https://www.airbornedrones.co/contact/ for more information